While some motorists may soup up their cars or even race illegally, the issue of speeding in Singapore goes beyond this group. The programme Talking Point investigates the safety risks at play here.

Is it easy for drivers to prevent an accident at the first sign of trouble? The speed matters. 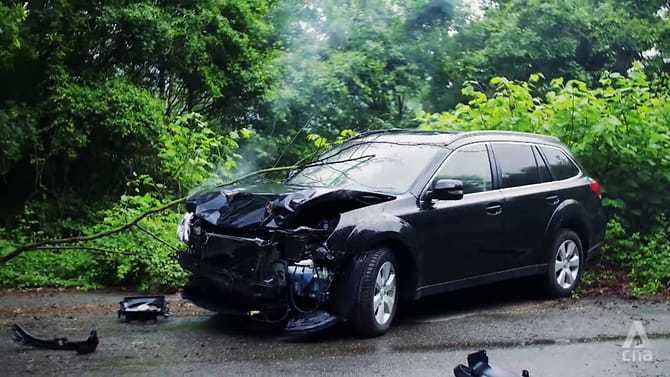 SINGAPORE: It claimed more than twice as many lives on the roads as drink-driving did last year.

Speeding is in fact Singapore's number one traffic offence. Between 2018 and last year, there were 2,212 speeding-related accidents that led to injuries or deaths. In the most recent high-profile case, in Tanjong Pagar last month, five men died.

Drivers who are caught exceeding the speed limits by more than 40 kilometres per hour must appear in court, instead of just paying a composition fine.

Those who take part in a race face the possibility of jail time, a fine and having their car confiscated.

Yet despite the casualties and penalties, some motorists love going fast, with or without vehicle modifications that can endanger lives.

Speeding is more dangerous than motorists may think for several reasons, the programme Talking Point finds out. And the risks are found not just in the underground world of speedsters.

An accident victim could have a "belt burn" across the chest, for example, or something worse.

"I need to worry about whether there's a neck injury … or whether the blood vessels within the neck have been torn," said Tan Tock Seng Hospital's director of trauma services, Adjunct Assistant Professor Teo Li Tserng.

"And sometimes the heart can be bruised by hitting against the breastbone."

Survivors of a high-speed crash often have internal injuries that lead to long hospital stays, as the impact of the crash may have caused significant damage to organs such as the liver, spleen and intestines.

"If we were to take a box of soft tofu (and) shake it … look at the state of the tofu — that's exactly what's happening to the liver," cited Teo.

When we hit something, the seat belt pulls us back. The solid organs are like the tofu within that box … and just tear.

The faster a car goes, the greater the force at which the seat belt restrains its wearer. "Without the seat belt … you may have smashed right against the windscreen. You might not even be making it into hospital," he noted.

"(But) if you're going to travel at very, very high speeds and … crash the vehicle, the speed would now essentially render the safety devices not very useful."

It is also not very easy to prevent an accident at the first sign of trouble. Of all the traffic accidents Melvin Lum has investigated over almost a decade, "98 to 99 per cent" were due to "judgement errors".

"People have misjudged the speed of an oncoming car," cited the senior forensics consultant and accident reconstructionist at Koays Accident Reconstruction.

"There are also instances where they realise that the car has already lost directional control, and they step on the brakes, which … would worsen the situation."

In the daytime, a driver's reaction time when faced with an obstacle is about 1.5 seconds — and about 2.5 seconds at night. But Lum cautioned that longer distances are needed to stop a vehicle going at high speed.

These distances apply to drivers who are in control of their vehicle. But if the driver loses control, the car can go into a spin, "which is why braking when doing a high-speed turn is never a good idea".

Lum said: "The car would go off at a tangent and just slide. It would've lost any braking or steering input."

It is fair to say that owners of fast cars such as sports cars are prone to drive faster than other drivers, thinks sgCarMart editor Julian Kho. And typical cars do not compare with these machines.

"Sports cars tend to give you that better feedback. They are equipped for faster driving habits. They're more communicative in that sense," he said.

"You sort of get a feel of what exactly you need to do and how to do it, especially when you're handling turns."

The cost of a sports car might be beyond the reach of some drivers, however, so another way to go fast is to soup up a lower-end car.

This may include modifying the air filter system, the suspension, tyres and brakes, cited Jason Lin, who is in charge of business development at the Garage R Performance Centre's motorsports division.

He showed Talking Point the legal modifications made to a Suzuki sedan at his workshop — ones that could make the car go from zero to 100 km/h in 6.9 seconds, compared to 7.4 seconds for the unmodified version.

But power-specific enhancements can render a car "off balance", making it dangerous. "The handling would be different," he said. "You can't really control the car well."

A car is basically at its optimal state when it leaves the factory floor, as its original components are meant to work together for safe handling. For instance, the tyres and brakes are suited to that vehicle's engine power.

So when customers ask Lin's team to modify their cars to go faster, the advice is to take a holistic approach to car tuning, as customers should not be changing only the engine power. Some modifications are also outright illegal.

LACK OF SKILLS, OR SPACE?

While drivers of sports cars may feel that they can handle their cars better, there is more to handling speed than just understanding one's car, according to professional racer Andrew Tang.

"A lot of people think that you just sit in the car and turn the steering, and you're fast. But there's a lot more skill to it … how you use your braking technique, your steering technique," he cited.

One corner isn't the same as another … You're always applying different techniques for the entry, in the middle and the exit.

High speeds thus require more than what motorists learn before obtaining their driving licence. "It requires a whole different kind of training," he said.

Kho, for one, acknowledged that he used to be "irresponsible" on the roads.

But he said he "absolutely" got it out of his system after he took his car to Sepang several times and put the pedal to the metal on the Malaysian track.

"I felt so satisfied that once I was back on public roads, I told myself, 'You know what? I've been there, done that,'" he said.

This is why former thrill seeker Sam (not his real name) thinks Singapore should have a similar venue.

"I know that (racing) is illegal and isn't right. But I feel that people do it because we don't have a space to express our interest in motorsports," said the convicted speedster who used to enjoy "the sense of accomplishment" and adrenaline rush he got whenever he raced.

"If the Government can build a casino just to let people gamble, I don't see why they can't build a racetrack for motorsports enthusiasts."

A "safe space" is a must to "push the limits" of speed, noted Tang. But it still takes more than that, like having the right equipment, including helmets and racing suits.

"We have specific harness systems and everything to hold our neck in place as well as neck braces. And then obviously, the cars are manufactured with six-pin safety belts, so when you hit something you don't go flying," he said.

The fact is most cars and roads here are not built for high speeds, summed up Talking Point host Steven Chia, and "most of us overestimate our driving ability".

His suggestion on where to "work off that need for speed": On a go-kart track.