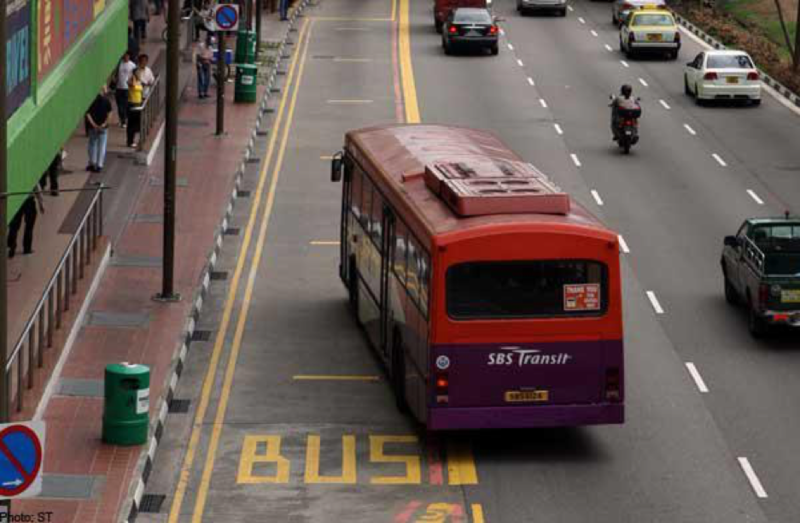 During those peak hour jams and overly packed roads, they sure make bus lanes all the more tempting. Unfortunately, buses today are equipped with video cameras and traffic wardens are stationed at bus lanes to write down that hefty $130 fine on you. Here are some notes to take for better understanding of the different rules imposed and avoid getting into trouble!

There are 2 types of bus lanes:

Single yellow line (Normal bus lane) — are solely for approved vehicles during peak hours; BUT periods in between for normal motorists to use.

Get the list of Normal and Full-Time bus lanes here!

If you ever find yourself near or inside bus lanes during the restricted hours, follow these rule of thumb!

Driving a bus (scheduled and non-scheduled)? Rejoice as bus lanes are open to you. However, non-scheduled buses, such as school or factory buses, are not allowed to stop, drop off, or pick up passengers along the bus lanes. Vehicles such as emergency vehicles, polices vehicles and bicycles are also permitted to use the bus lanes.

If you are caught, you will face a hefty fine of $130 — same value as not giving way to buses which are exiting bus stops in the Mandatory Give-Way to Buses Scheme. But rest assured as the fine does not come with any demerit points.

In many cases, offenders are unintentionally caught in bus lanes. Jams, turns which are too close to the bus lane and unfamiliar roads are all common reasons for such cases. If you are caught in this sticky situation, you might have a strong case to appeal and waive the fine!

Try these tactics to maximize your chance of getting a second chance!

Try to contact the officials as quick as possible as their processing and reply periods are uncertain. You can even make your way down to try to appeal, and if unsuccessful, pay the fine on the spot.

4. When Writing the Appeal

Be sincere, sound repentant and apologize while appealing for the waiver. If you are a first-time offender, do assure them that you will not repeat the same mistake. If you do face some issues with paying off the fine, it could be something to add in your appeal to help them understand your plight better.

If your offence was due to uncontrollable circumstances like jams, unfamiliar roads and turns too close to the bus lanes, say so! You have a strong case, and can even ask them to cite the details and ask them to review the evidence.

Also, if your offence was with necessary reason (such as rushing to the hospital with your wife in labor or a situation where time is of the essence) then state so in your appeal. They might empathize with your situation but make a note to not exaggerate your story as it just makes it seem like a lie to evade the fine.

If you need some reference on appeal writing, search it up. There are a range of formats and examples cited from past offenders in hopes of helping fellow drivers in the same situation.